At the Build 2015 conference in San Francisco last week, Bango partner Microsoft made a number of game-changing announcements that for many may have gone unnoticed.

First they announced that carrier billing is coming to all Windows 10 devices, in recognition of its unique power to reach millions of people and enable simple payments worldwide. Importantly, this includes all non-mobile connected PC’s and tablets in addition to smartphones, all part of their Universal Windows Platform. Microsoft claim that “carrier billing will result in an 8x increase in purchases”, but just how accurate or realistic is that number and what does this mean for mobile operators?

Also of importance is the introduction of subscription payments, which will build longer term customer engagements and deliver significant ongoing growth in value. Crucially it will also allow the latest subscription products, like Microsoft Office 365, to be sold online with carrier billing.

Microsoft claims a primary focus for carrier billing is to grow purchases in countries where credit cards are not common. Bango notes that over 90% of app store purchases already come from Direct Carrier Billing in countries like Indonesia. This can result in sales far exceeding Microsoft’s prediction of 8x. Bango typically sees between a 20x and 200x increase depending on the store and market. 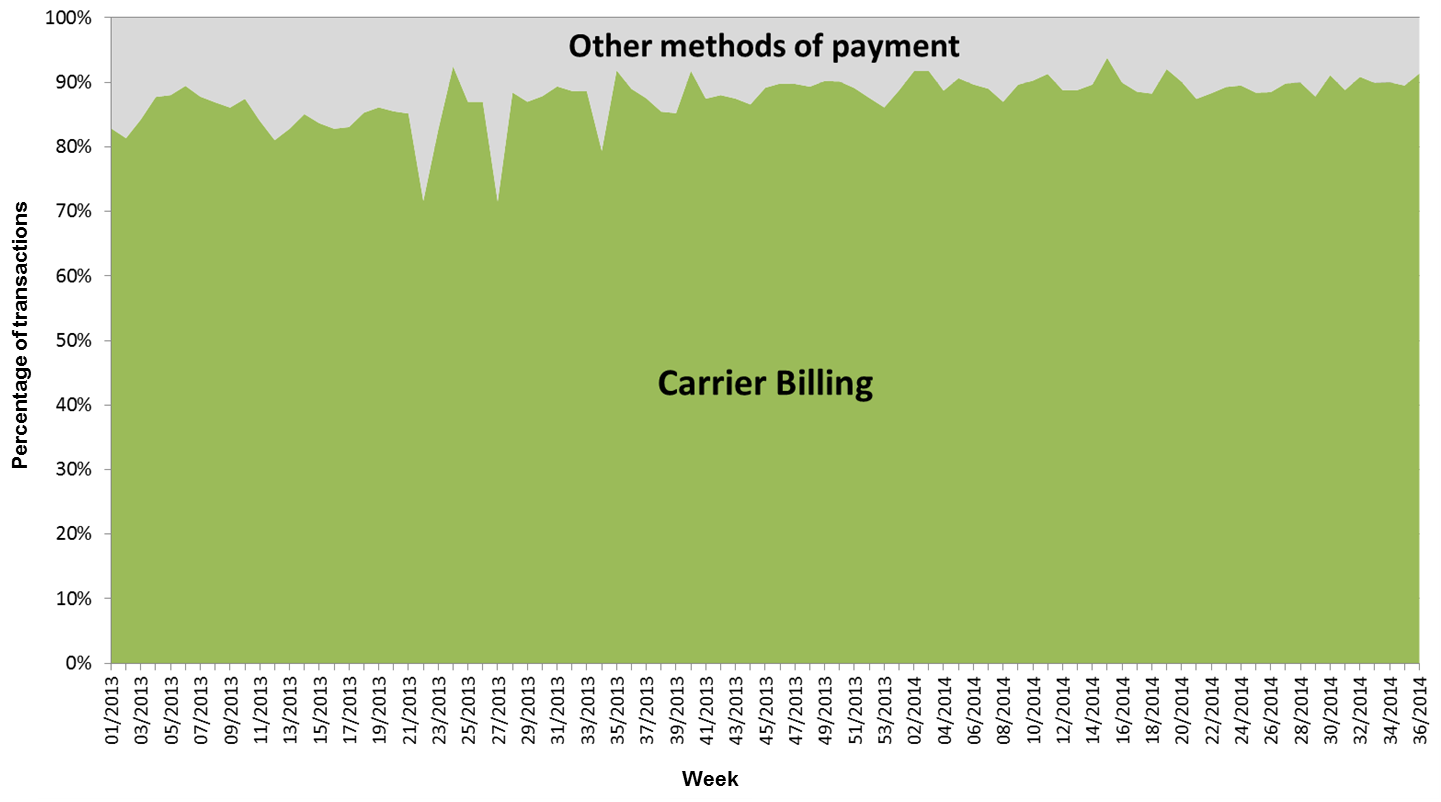 While these increases depend on each market, more importantly they rely on the store having a critical mass of desirable games, media and apps that customers wish to purchase. This is currently more pronounced in the carrier billed payments Bango processes for Google Play.

Once set up payment methods infrequently change. But if the customer’s credit cards are not to hand when buying, even if the store only needs to ask the customer to re-enter the CVV code, carrier billing will take the cards place, becoming the customers default purchase method.

An unprecedented opportunity for mobile operators

The total value of software sold worldwide across Microsoft devices, including PC, tablet and smartphone is currently worth billions of dollars. Microsoft Office 365 consumer revenues alone exceed half a billion dollars in annual revenue run-rate last year with 5.6M consumers now effectively renting Office. Most importantly, Office 365 is priced between $6.99 and $9.99 per month which is well within carrier billing spend limits, should Microsoft choose to sell it using carrier billing. Even notoriously expensive software solutions like Adobe Photoshop and Elements are now sold as a monthly subscription, and at $9.99 per month they too are well within mobile operator supported price limits.

PC gaming is a massive market for Microsoft and Statista estimates that worldwide revenues from video games across PC, tablets, consoles and smartphones could be as high as $111.06 billion USD in 2015.

Microsoft’s announcements at Build 2015 mean that this huge, established software market is to be monetized using carrier billing and Mobile operators will effectively become the payment processors.

Naturally the size of this opportunity depends on the market uptake of Windows 10. Microsoft has set a goal of 1 billion devices running Windows 10 in two to three years’ time, an achievable number based on a planned free upgrade policy for Windows 7, Windows 8.x and Windows Phone 8. This compares with over 600 million Windows 7 and more than 400 million Windows 8 licenses sold to date and over 10 million Windows Phones sold in Q4 2014. Microsoft also announced the ability to install Windows 10 onto a number of popular Android devices, further growing their smartphone availability.

It also depends on what software is available to purchase with carrier billing. Microsoft announced that the new Windows 10 store will support the sale of the widest range of applications, including those written for .Net, Win32 and importantly, iOS and Android.

Next steps to ensuring the highest revenues

The most important next step for any mobile operator is to integrate quickly and cost effectively to ensure revenues are not lost to prolonged development effort, ongoing operating expense (OPEX) or subsequent system downtime and customer care overheads.

The Bango Payment Platform provides a unified single path for operators to integrate with all the leading app stores – including Microsoft. Any operator already integrated with Bango, either as part of the current Microsoft Windows Phone Store, or for other stores such as Google Play, Samsung GALAXY Apps, Amazon Appstore, Firefox Marketplace, BlackBerry World or BBM, are automatically ready to launch with the new Windows Store across all Windows 10 devices as soon as they have their new Windows 10 partnership signed.

One Bango Payment Platform integration dramatically reduces costs, complexity and risk, allowing all stores to be launched in parallel rather than one after the other – delivering the fastest time to market and revenues.

Contact Bango today to register your interest and maximize your revenues.