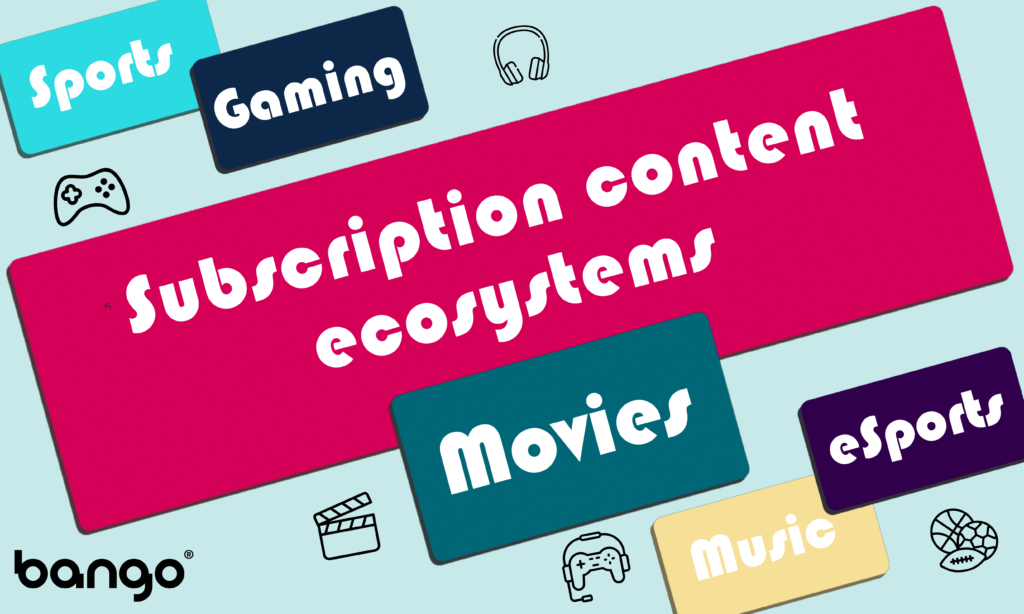 Explore the subscription content ecosystems: How much revenue is being generated? How fast are they growing? Who are the key market players? What are the growth drivers?

Which content ecosystem offer the biggest opportunities? Read our ecosystem overview to find out, starting with movies.

Video streaming is still relatively new but has totally disrupted the movie landscape, changing the way consumers pay for and access movies and series. With a market valued at over USD $50 billion in 2020 and a compound annual growth rate (CAGR) forecast to be 21% from 2021 to 2028, it’s big business! What’s not to love – instant access to a vast library of content for a small monthly fee.

Recent years have seen broadcast media companies vying to increase their movie streaming market share, as more and more platforms facilitated the digitization of services. This fierce competition to capitalize on the ever-growing media shift to online is aptly termed ‘streaming wars’, a drive primarily initiated by Netflix.

Netflix needs no introduction when it comes to movie and box series streaming. This enterprise hatched as a small DVD rental initiative, exploited several market gaps during its fledgling years, and is now a household name across the globe. The Netflix recipe of combining a wealth of curated content with their own original content has proven a hit with consumers.

Other media companies soon followed suit to capture the opportunity from the seismic shift in consumers moving online to watch movies. These include industry giants such as Disney, Apple and Amazon, who recognized that to compete in the new era of accessing entertainment online, they needed their own streaming movie service.

The global streaming industry is big business, and shows no signs of slowing down. Statistical insights provided by the FIPP Media Association indicate which movie streaming services are most popular among subscribers worldwide.

Netflix dominates the video streaming sector with more than 200 million subscribers around the world. Trends indicate that this video streaming giant’s consumer base in the Americas has started to level off. However, Netflix’s reach in more than 190 countries and its continued rollout of original content puts it more than 50 million subscribers ahead of its closest competitor, Amazon Prime Video. In Q3 2021, Netflix generated approximately $7.5bn.

Netflix might have ushered in the movie streaming revolution but it’s now competing for consumer attention with a host of major players who are chipping away at their market share, including Amazon, Hulu, Disney+, HBO Max, Peacock, Apple TV+, Paramount+, Discovery+.

Amazon Prime Video has approximately 150 million subscribers worldwide. One should, however, keep in mind that Prime Video is included with an Amazon Prime subscription, which saw a definitive upsurge in growth since the onset of the pandemic. All the segments of Amazon generated an accumulative revenue of $110.8bn during Q3 2021.

Although most prominent streaming services saw a surge in subscribers with the COVID-19 pandemic, Disney+ came out on top in the US market. This iconic name in entertainment launched its streaming segment, Disney+, late in 2019.

It accumulated its 95 million subscribers in just over a year. The fact that, upon its launch, the Disney+ content was limited makes this growth even more notable. When the service hit the digital arena, it had only one original series, which sported just one episode in those early days.

Disney+ has since soared in both its content and viewer base. The company initially thought that it would only reach the 100 million subscriber mark by 2024.

While the growth of Disney+ is impressive, it’s predominantly focused in the US. On the global stage it’s Netflix and Amazon who dominate with their relentless focus on driving subscriber growth via increasingly innovative bundles, incentives and offers.

Other streaming services making an impact on the market are:

Ronan Dunne, EVP and Group CEO of Verizon Consumer (Verizon Communications Inc.) commented that relationships with third party services like Disney, “are definitely a way of creating greater loyalty in the base”. Adding that there are multiple benefits for Verizon, “It affords us the opportunity both to increase ARPU within our existing customer base, to be more attractive relative to some of our competitors with the mix of partners that we’re bringing and then access new addressable markets”.