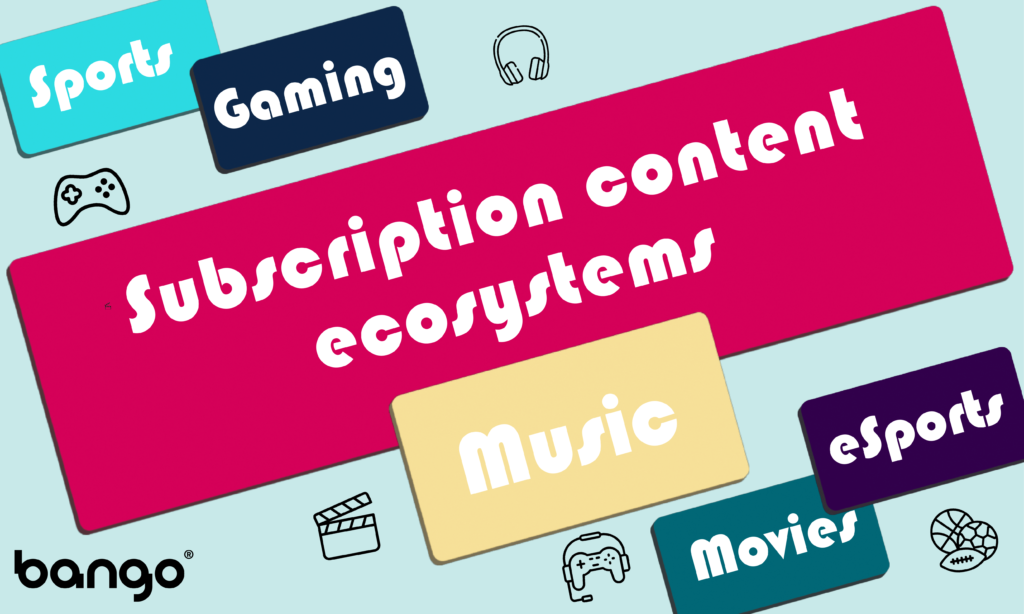 Explore the streaming subscription content ecosystems: How much revenue is being generated? How fast are they growing? Who are the key market players? What are the growth drivers?

Which content ecosystem offers the biggest opportunities? Read our ecosystem overview to find out, next up music.

In this digital age, streaming services encompass a large part of modern entertainment. Upcoming generations increasingly turn to the internet and online services to access visual and audio media. Bango Resale took a closer look at music streaming market specifics and which providers are topping the charts.

Music streaming services require no downloads, and the content is immediately accessible. Hence its domination as the primary method for how we consume our music.

The Recording Industry Association of America (RIAA) indicated in an early 2020 report that audio streaming constituted close to 80% of the music revenue in the US in 2019. Music streaming is an $8.8B industry, which totals more than the entire industry managed to amass in preceding years.

The latest indicators from Forbes echo these trends. The global media giant said that the RIAA determined that music retail revenues grew by 27% during the first half of 2021 and rendered a combined revenue of $7.1B. There was a $1.5B growth when compared to the same period in 2020.

Forbes also indicated that the majority of this music revenue came from music streaming, which made up 84% of the stated incomes. Compact disc (CD) and vinyl records contributed 10%, while digital downloads and music copyright licenses brought in a combined 7%.

The global music streaming market can be categorized into subscription and ad-supported. Analysis established that paid subscriptions on music streaming platforms such as Spotify and Apple Music exceeded 80 million. These platforms pay a certain percentage to music rights holders according to the number of streams.

Studies found that North America, with a revenue share of more than 30% in the industry, dominates  the music streaming market, with key companies such as Amazon, Apple, Google and Pandora Media driving the digital revolution. The high-quality internet connectivity, such as fixed broadband speeds and coverage, in this geographic region also encourages subscriptions and streaming.

Europe also plays a prominent role in this market, and experts feel that this region is set for substantial growth between 2020 and 2027. A 2019 report by the European Commission on its Digital Economy and Society Index found that an estimated 81% use the internet to listen to music, watch videos and play online games.

The Asia-Pacific region is projected to see the fastest growth in music streaming in the years to come, especially in light of several Asian services expanding into Africa. Many of these streaming services offer free promotions to attract new customers and keep existing ones.

Spotify occupies the top spot in the music streaming Industry. Spotify, Apple Music and Amazon Music together account for over 60% of the market share. Spotify still remains the market leader with a 32% market share and the company has maintained a share between 32%-36% every quarter since 2015. This is followed by an 18% share by Apple Music and 14% by Amazon Music as of 2020. Tencent Music controls about 11% of the subscribers in the music streaming industry despite being available almost exclusively in China. (MediaResearch.com, 2020)

Subscribers can opt between various subscription plans and can also test drive the apps with free trials and ad-based subscriptions. Some of these platforms, such as Apple Music, offer live radio. Others, such as Amazon Music Unlimited, are step-ups from existing, but limited, services.