The world’s in love with App Stores but how can you profit from them?

Home News The world’s in love with App Stores but how can you profit from them? 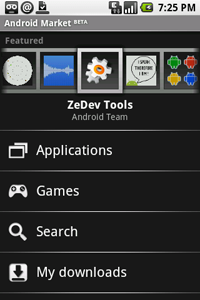 The GPhone app store is due to go live this week

App Stores for mobile phones do seem to be flavor of the month, judging by the announcements at Mobile World Congress this week. But what does this mean for developers and content providers who want to get a slice of the revenue pie?

In the “good” old days, your app was sold by Handango or Handmark but then along came Apple with their highly successful iPhone App Store and now nearly all the major handset vendors have or are jumping on the bandwagon.

Do you optimize your app for each of the app stores?  This is a pretty hefty task as there are now quite a few to choose from.  Google will start selling GPhone apps from the Android Marketplace this week, RIM will have their Blackberry store ready next month (March)  and Nokia plan on launching their Ovi store in May.

Then which will provide the best channel to market?  This is a tough one.  When you look at the number of handsets out there, Nokia lead the way with 200m S60 phones at the end of 2008, compared to 15m iPhones, 15m Blackberries and  25m Microsoft Windows phones (still no dates yet when the Windows Marketplace will be launched).

If we look at growth potential then the iPhone App Store looks like a good bet with 40m iPhone sales projected for end of 2009, RIM at around 25m and Google around 5m but the leader still has to be the S60 phone with sales likely to be far higher at 300m.

The other deciding factor is how easy it’s going to be for consumers to pay for your apps – a store that supports a variety of payment methods including on phone bill, credit card and PayPal would be ideal.  Sadly, none of the app stores offer this.  RIM will only provide PayPal, GPhone users will pay with Google Checkout and with the iPhone you must have an iTunes account to pay by credit card.  It’s too early to know what Nokia will offer but one sure way they can bypass the competition and offer a superior user experience is to give choice.

Mobile operators have been opening up their billing systems through Bango, and Bango already powers most of the popular application stores that sell across handset types – like Gameloft, EA Mobile, GameMobile and others. Initially the handset makers may not want to align with operators, and need to push their own user experience – credit card payment enables that.

With app stores hungry for items to fill their shelves, there is a big demand for applications, although getting visibility is another challenge. For the application developer, the optimum strategy may be to simply place stock in all app stores and then use analytics and careful tracking to see which ones yield the best results

P.S. Its definitely worth reading some of the application developer blogs: