…..this question has been at the top of my mind this week, prompted by several parallel events. 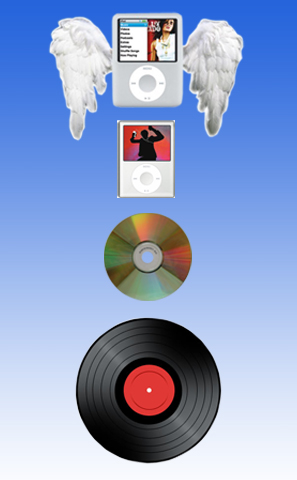 Google announced its cloud music “locker” service ‘Music Beta’, just a few weeks after Amazon made its service available. Both are intended to allow music fans to upload their digital music collections to an on-line storage facility (the cloud) and access and listen to them from any device. Neither provider has formalized these arrangements with the music license holders (the record labels) which has been the central subject of conversation stimulated by these announcements. Amazon has, however, tagged its MP3 store to the cloud service.

It seems that in the digital age, the music collection of old (beloved of the vinyl generation) holds little kudos now, and music affinity is driven by social interaction that tries to satiate an endless appetite for constant new sounds. As the painstakingly crafted album, cover and all, has disappeared, today’s playlist is curated not by “the band” but by the listener, and is a much more ephemeral thing. In fact it’s so ephemeral that a listener doesn’t have to be involved any more – Google’s Instant Mix will apparently locate music for me that I ought to like (hopefully using different targeting algorithms to those powering Google maps….).

In parallel I was in Cambridge, England last week, as the Google coverage flowed in. Here, two other events took place, both very much off-cloud, but very relevant to the question of why music matters. First, a debate at Cambridge University, provocatively titled “Classical music is irrelevant to young people”. I didn’t attend the debate, but the motion itself is likely to fire-up a lively discussion anywhere.

The second event continued the classical music theme. The celebrated pianist and classical music evangelist Alfred Brendel gave a lecture at the University’s concert hall. Over an hour, Brendel unfolded a different analysis of why music matters. Could a musician perform a piece written by someone else – say Beethoven, or Lennon and McCartney for that matter – and interpret any more from the musical score than its structural elements? In other words, beyond “play this part loudly”, “this part softly”, this smoothly, this abruptly etc., could the intention of character in the music ever be inferred? Brendel showed us how the same notes could build an entirely different effect, depending on the character one chose to impute.

There were nearly 1000 people in the audience (about a third “young people”, recently re-defined as anyone under the age of 40….), to whom a forensic analysis of this subject mattered a great deal. Though most of us won’t analyze our music to this extent we are all arbiters of taste, critics if you like. Music as an industry has been disrupted multiple times over the last 10 years, such that it will never return to the A&R based, music label monoculture of old. But fans with mobile devices who drive music distribution through clouds rather than compact discs are, still, so profoundly affected by their music that there will always be a business in the engagement of an audience through music.

Cloud services allow the mobile generation of music fans to discover and listen anywhere and everywhere, anytime and all the time. Google’s service is slated as “free while in beta” – the business model is still being decided. Psonar is a good example of a business focusing on the mobile audience, built around the monetization and delivery of music. Every streamed music track incurs a micro-charge – around a cent or two a play – which is most often charged to the listener’s mobile phone bill. It guarantees revenue for artists and labels, but is so low cost that a gifted playlist costs no more than 10 cents. Disruptive but also constructive – engaging audience, artist and label in commercially distributing the music that matters to every mobile consumer.