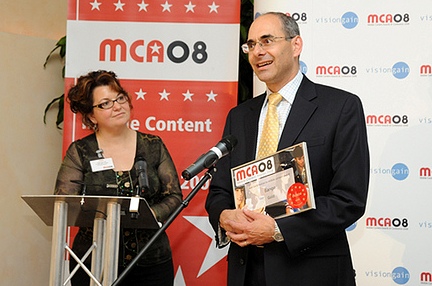 Bango received the top industry award for ‘Best Contribution to Mobile Content’ at last week’s Mobile Content Awards (MCAs) 2008 in London. Organised by Visiongain, the awards recognised dynamic and technological achievement in the mobile content and applications arena.
The special Gold Award was presented to Bango in recognition of its achievements and commitment that has helped to drive forward the growth of the mobile content industry. Bango was selected by a team of industry experts and the award was collected by Martin Harris, Bango’s SVP of Sales, at the gala dinner in London.

“Peggy Anne Salz, who presented us with the award, commented: ‘From its start Bango has worked tirelessly and pioneered mobile internet technologies. Today it sits firmly at the centre of the mobile web ecosystem’. It is fantastic to receive this recognition from the industry and such an esteemed judging panel,” said Martin Harris, SVP of Sales of Bango.

Peggy Salz who was chairwoman and MC at the MCAs was impressed by, “the variety of the companies attending and the quality of those that made the shortlists.” In her view, “the attendance at the event represented a microcosm of the mobile industry, encouraging a productive interplay between key players in the mobile industry and enabling valuable networking opportunities.”
The event consisted of a two day conference and awards ceremony and gala dinner and brought together key industry players from mobile games, music, multimedia, messaging, TV and advertising and marketing companies.
Share this