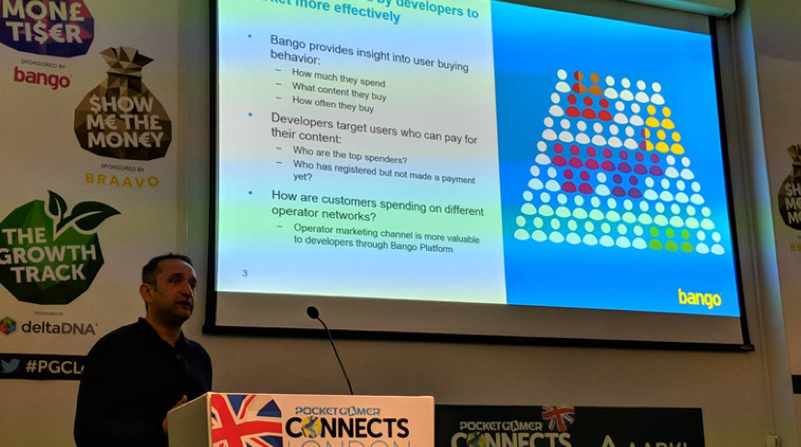 Games developers from across the globe converged in London last week for the annual conference, Pocket Gamer Connects London 2019. With 2500 delegates the conference had twice as many attendees as 2018 and featured 16 different tracks. Bango sponsored the Monetiser track and presented the opening “Superstar speaker” keynote session on day one.

For those of you that only have a few minutes to spare, here are the highlights:

It’s no surprise that the majority of apps are free to download. Converting users to make in-app purchases or subscriptions is difficult. A recent AppsFlyer report covering 2.1 billion installs from 5,500 apps was presented at the conference showing that in emerging markets such as Indonesia and Brazil conversion rate can be as low as 1%. Getting to these users is like striking oil. Bango provides a route to these users by identifying who can pay and has a proven history of making payments.

Discussion around hypercasual games infiltrated most of the 16 tracks. This category has seen a 350% growth in market share, however it still only accounts for 5% of the total market. The question that everyone is asking is, how long will this growth continue? If you are not familiar with this category, these lightweight and instantly playable games are addictive and require simple tapping interaction. They usually have a simple UI and often revive some of the old arcade games of 70s and 80s. One interesting business difference is that the majority of revenue is from in-app advertising rather than IAP.

There are many hurdles to overcome such as localization, cultural preferences, targeting advertising to users, fragmented app store model (run by handset manufacturers) and government bureaucracy. However, once you get past all that there is the big prize of billions of users in a fast growing economy. The good news is that installs of Western apps in East Asia were up 80% in 2018.

The previous conference in Helsinki saw the introduction of a separate Blockchain track. PGC London had two tracks dedicated to Blockchain. The use of Blockchain is varied and there are no dominant patterns emerging yet. Uses include payment and ownership of assets, but there are not many clear messages about why this matters to users.

5. ‘Try it now’ brings try before you download to the Google Play store

It’s now possible to go to the Google Play store, search for an app and then press ‘try it now’ to start using the app instantly before you decide to download. The footprint of these instant playables is 10MB or less and they increase the conversion rate for app installs.